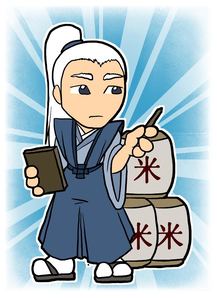 Who is Doji Arami?
A background story for Winter Court 5

"Who is Doji Arami?" Daidoji Gozen had picked up the empty grain sack, which was clearly marked with a series of numbers and the chop with the name of said person. He was a raw recruit, new to the front lines.
The older Iron Warrior he was speaking to shook her head. "I don't know. I've seen that chop in a dozen villages, though. Rice. Millet. Barley. Vegetables. Bags of acorns and roots, even, though acorns taste terrible. "
Gozen nodded in agreement at that. Most of the bushi had become familiar with the taste.
Daidoji Murai looked around. "Look at the fields. Nothing has been growing in this village for months. There's not even a vegetable patch. Sometimes, the heimin can get food to grow, of course, if this cursed war leaves their lands free enough to scratch out another season. But if the war draws too close, or strikes at the wrong time, a village can lose everything and the villagers can starve in weeks. They'll all be dead long before they can get word that they have no food, given the way the roads are. They won't even have enough food to escape, and how would they know where go anyway?" She gestured at the empty sacks. "Someone is mapping the battle fronts. Someone is figuring out what crops are going to be destroyed, and is shipping food there just in time."
"Doji Arami?" Gozen asked, looking again at the chop with newfound respect. "He must be a very wealthy and powerful man!"
Murai nodded. "He must be. Maybe he is a seer, who can foretell where the battle will go? Or maybe he has a vast spy network. Though a spy network for these tiny villages? It seems an insane waste of resources. I don't know how he knows which villages need the food, and which have food to spare, but the carts are almost always there. It's been a blessing."
Gozen nodded, letting the bag drop. "Well. We could use all the blessings we can get."

In a tiny office, buried in the heart of Kuyden Doji, a lean man with a distracted expression in his eyes hunched over his abacus. The room was a disaster of wax tablets and letters, tax tallies and ledgers, spilling off the desk top and onto the floor.
He was extremely tall and almost gaunt, with mid-length white hair that seemed almost disheveled as he ran his hand through the mop. His eyes were dark and intelligent, and his nose was hawk-like. His yakama was blue, with a repetitive geometric pattern across it; for he found the pattern pleasingly systematic.
"Two hundred thirty seven bushels in Prosperous Valley...fifteen day's journey from there to Sunflower River..."
"Arami! Do you have my calculations complete yet? I refuse to be late with supplies to the front because you have not completed my computations in time! It would be embarrassing."
Arami immediately straightened himself and went quickly to the door of his room, folding his hands in front of him and bowing in polite and respectful...and perhaps some would say fawning...apology. "Of course, Hirotaka-sama. I have them right here. I would never be late. I apologize so much for making you wait so long for them, of course, but you only requested it an hour ago, and it required many thousands of...."
"Enough! I am impatient with your driveling and I don't want to hear your excuses. These numbers better be correct. I want to look good before the general."
Arami muttered under his breath, "My numbers are always correct." But aloud he said, "Of course, Hirotaka-sama. I am so sorry, and of course I live to serve the house of Doji and the glory of the Crane."