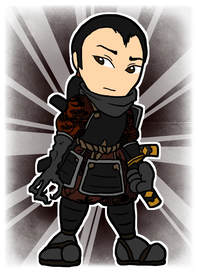 The Banner of the Shogun
by Utaku Yamada

The letter came for Kakita Kyoumi in the middle of the night. She did not fully see the messenger, the letter had no signature or chop. It bore just a single line of text.

The kite has cut its strings.

Kyoumi felt a chill down to her very soul. This news she had long dreaded. Talked about only in closed room with hushed whispers. They had all known it was coming, done what they could to prevent it. But there had been losses against the Onyx last summer. The relentless, bloody, gruelling grind that had been Yuhmi’s rule since Kanpeki’s death. Who was she to blame him for being pushed to breaking point? It was a matter of time.
Kyoumi went to her desk and wrote a quick note, sending the servant Izumi with it to Hida Kozan, the Voice of the Emperor.
“Put in his hands, wake him if you must,” said Kyoumi.
Then she went to change.

In Hida Kozan's rooms in the palace, Kakita Kyoumi sat silently on a cushion, the darkness only penetrated by a single lantern. Quite a number of Kyoumi’s meetings with the Voice had been at such odd hours. Information came in when it did, and sometimes it had be seen to quickly.

Hida Kozan burst in, his face in an uncomfortable frown. “I have seen him, the Shogun, Akodo Kano,” said Kozan, his voice full and deep from his contact with the Void. “It is as you have said, Kakita-san. Kano rides for Otosan Uchi, the Bakufu with him. They will be here the day after tomorrow.”

“In some ways, I cannot blame him,” Kyoumi said, looking down at her hands. “When the Emperor…” She looked up at Kozan, “…when you ordered the Second Imperial Legion to the Shinomen last summer, leaving the First and joint forces undermanned in the middle of their offensive, many more wiser than I thought the decision mad.”

“And if I had not, we would have lost all that we have gained. Yuhmi would have reopened the First Seal. Kozan must never know what was done that day.” Kozan paces, deep in thought, talking quickly. “After that and last winter, the Shogun has many in the courts with him. I do not believe he would go so far as to strike down the Emperor, but he could execute the Chosen and their allies in the Imperial court for corrupting the Emperor with bad advice. This would have the Son of Heaven surrounded by those only friendly to the Shogun…Kano could trap the Emperor, and those who survived, in the capital with the Legions outside. And with the Emerald Champion diverted so far north, there will not be time for him to intervene in such a coup. Afterwards, Kakita Karasu would be helpless to contest if word came that the Emperor forbade action against Kano.”

Kyoumi looked thoughtful at this. “Hida-sama…what if there was a way to stop this completely?”

Kozan whipped his head around to look at her. “Eh?”

Kyoumi spoke calmly. “Birds return to their nests, but if the tree that shelters them is gone…”

Kozan sat down opposite her. “I am listening.”

Akodo Kano, Shogun of the Empire, rode up to Otosan Uchi with his banner flying free. Much of his escort was around him and additional forces awaiting him at the Legion Barracks. Riding up with Kano to the Imperial Palace were Ikoma Nishio, the Second General and Akodo Kibo, Taisa of the Golden Company.
Kano reached the gates of the palace and demanded to speak with the Emperor.

A single courtier emerged from the great gates and bowed. She was in her early thirties, a Crane with brown hair and grey eyes. Her on and make up were perfect, just as much armour for her as the Lion bushi wore. She bowed deeply before the Shogun when they entered, the full kowtow expected for one of his rank.

“Shogun Akodo Kano-no-kimi, I must humbly apologise. The Emperor is not in the capital at present,” Kyoumi said. “Please come in. May I offer you some tea?”

There was a long, awkward moment as the poet and the Shogun of the Empire faced each other down. She did not relent, so he did. He grunted, the Lion dismounted and followed her inside to a well-appointed reception room followed by Ikoma Nishio and Akodo Kibo, leaving their escort behind in confusion.

A servant appeared with a teapot and four cups. Kano sat at the table opposite her, Nisho and Kibo flanking him. They all drank their tea in silence.

“Perhaps I could speak to someone more senior?” Kano finally asked, trying to be conversational. “Chancellor Ide Meiryo-san, for instance?”

“Again, I apologise, Akodo-no-kimi,” said Kyoumi, her voice smooth as silk. “The senior members of the court are with the Emperor.”

“And when did they leave?” Kano asked.

“I do not presume to know the mind of the Son of Heaven,” said Kyoumi. “But I serve as a trusted aide to the Voice. I swear, anything you tell me can be passed on to him. Perhaps a letter?”

“I must speak with the Emperor alone on matters of utmost importance,” said Kano. “Do you know when he will be returning?”
“I am afraid I do not know,” said Kyoumi. “Everyone of importance departed hastily with scarcely a word to any of us lowly assistants. More tea?”

Throughout it all, Ikoma Nishio seethed inwardly but said nothing. Akodo Kibo averted his gaze, but it was only when they were saying farewells did he look up. He and Kyoumi locked eyes for a single moment, he gave her a slight nod then he followed the Shogun out.

The Shogun left a couple of days later, the Emperor showed no sign of returning and Kano could afford to wait no longer. The losses against Yuhimi and the Onyx were only growing in his absence.

That evening, Kyoumi and Kousuda sat in their garden enjoying the spring twilight.

“Do you think he will return?” Kousuda asked.

“Perhaps,” said Kyoumi. “But if he does, we will have to try something else. At least we have ferreted out his spies in the city.”
“Your achievements are growing, my wife,” said Kousuda with a laugh. “First you vanish the Emperor and the entire Imperial Court to Crane lands, then you prevent a coup.”

Kyoumi smiled, but she was worried.

In a secluded clearing of forest was a small gathering. A man in black armour with a blackened, claw-like right hand, a woman in a black kimono with a purple obi, and several men and women in different colours but with the impression of a black hand imprinted on the front. They sat silent, still, waiting.

Then the man in black armour stood, looking off into the trees. “They are returning,” he said.

Shiba Michio, bearer of Hand of the Obsidian Dragon, watched four of his followers struggle with a captive, throwing to ground. The prisoner had his hands tied behind his back and had a bag over his head. Muffled shouts were coming from beneath the bag.

Michio looked down at the prisoner, his face as cold and emotionless as stone. He had borne the hand for more than ten years now, strengthening him and hardening him. His followers the Black Hand had left a trail of blood from one end of Rokugan to the other in their retribution against those who had rebelled to Heaven’s will.

The woman in black came to stand beside him. Utaku Yamada, who had lost everything she cared about and given away the rest, including her only son. She was often the only check on Shiba Michio’s wrath, her voice the only one who could stay his hand.

Yamada looked down at the captive who struggled and shouted. “Was he alone? Was there anyone with him?”

One of the followers who brought the prisoner sniggered. “Not now.”

Yamada’s glare was like thunder. “This was supposed to be clean! Those lives were not yours to take!”

The man shrugged. “He had guards, how else were we supposed to take him alive?”

Yamada turned away, stalking off in silent fury.

Michio removed the prisoner’s bag to reveal the face of the Shogun, Akodo Kano. Dishevelled, battered but very much alive. Angry too, his shouts and insults muffled by the rag in his mouth. Yet the moment he saw Michio he fell silent, his eyes narrowing with the recognition.

“Yes,” Michio said, pleased like a teacher with a student who had learned a lesson. “I have been wanting to meet you for a long time, Shogun Kano. Do you know why you are here?” He pulled the rag out so Kano could speak.

“I know nothing more than what I see here!” spat Kano angrily. “A traitor and murder who has inspired more to carry out his campaign of murder and insanity! The land bleeds with what you have done, Shiba Michio!”

“I walk with the Obsidian Dragon, Shogun, I bring his vengeance on those who set themselves against Heaven’s will,” said Michio quietly. “And that is what you have done here, Shogun. You have sinned, and your punishment will be an example for all those think to follow you.”

Kano glared at him. “The words of a madman, I almost pity you.”

Michio only smiled at him. A dark, menacing smile. He turned to his followers. “Did you bring his honour?” One of the followers handed him Kano’s wakizashi. Michio nodded. “Prepare the pole.”

“No!” Utaku Yamada emerged from the darkness.

All eyes turned to look at her.

“Let him be as an example to others,” said Yamada. “But give him the mercy a samurai deserves.”

Michio looked at her silently a moment then handed her the wakizashi.

Yamada glared at him. “You mock this? It is not for you, but the man you once were that I do this.”

“War forges all of us, Utaku-san,” said Kano defiantly. “Even you.”

“Don’t make me change my mind,” said Yamada. “Cut his bonds, get his armour off.”

She threw Kano’s wakizashi on the ground in front of him and unsheathed her katana.

In northern Crane lands, Kakita Karasu the Emerald Champion listened to the rain drum on the roof of his tent. Before him was the report he just received about the death of the Shogun, Akodo Kano. He had been found dead in a forest far from his camp, his guts wrapped around a pole with a bloody wakizashi in his hand. His severed head atop the pole. The black hand imprinted on his face left no doubt who had done this.

Damn it, Michio! If the Black Hand could just take someone as prominent and protected as Kano, how far could their reach be? Was anyone truly safe from their wrath?

Akodo Ryoichi appeared at the door of the tent. “He is here?”

Karasu went out; squinting through the rain, he saw Akodo Kibo and approached. “Well?”

Kibo made a bow. “Kyoumi managed to stop him, but Michio had the last word.”

“He did,” Karasu said darkly. “Did you see anything of Yamada?”

Kibo shook his head. “Kano had been dead for sometime when we found him.”

Karasu nodded, there was really nothing to be done. A crisis had been averted, but it was awkward and bloody.

“No, no,” said Karasu. “You served Kano well, Kibo, there is no reason why you can’t keep doing the same for me.” He gestured to the tent. “We have a lot to talk about, come in out of the rain.”

With a little reluctance, Kibo followed Karasu into the tent.