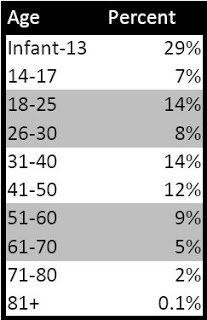 Demographics of Rokugan
In Legend of the Five Rings 5th Edition, we're given some new numbers for the Size and Population of Rokugan.

Rokugan is described as being 900 miles long by 600 miles wide.  Obviously not all of this land is available for farming and living on, especially in areas like the Shinomen Forest.  But we can use some Real-World comparisons to make up some broad numbers to work with.
Rokugan area: 900mi X 600mi = 540,000 square miles
Japan area: 145,937 square miles
Pre-Edo period Japan population (high estimate): 22 million  (from 1600 Japan here)
Rokgaun Population (high estimate) : (Japan population / Japan area ) X Rokugan Area = 81,404,990 people

Samurai can't make up more than approximately 1 in 20 people in the population or there would not be resources to provide for them.  5% is a common number for non-producing elites in most civilizations. including Japan if you don't count ashigaru.  So...

Of course, not all samurai of fighting age. Using this demographic table for medieval populations from here...

Using this chart and an approximate Gempukku of age 16 and retirement at age 45, we get:

Of these samurai, we are told that approximately 2% of samurai are shugenja.  Of those that remain, the percentage of the population that are non-bushi (courtiers) varies from clan to clan.  With a normal demographic split, the women would be the non-bushi and there would be at least a 50/50 percent split between bushi and non-bushi without counting courtier/courtier couples.  Given the variations between the clans, I'll average out to a 50/50 split between bushi and non-combatants of age.  These non-combatants can be merchants, artisans, courtiers, wounded bushi no longer able to fight, or any other sort of non-combatant.

Different clans have different percentages of bushi, non-bushi, and shugenja.  Also there are the Imperial forces and Ronin in Rokugan which also are part of these numbers.

Some clans, like the Crab, will have bigger armies. while others will be smaller.

In AEG's L5R system, the following numbers were given in Way of the Dragon.

From this, you can see that those numbers are not awfully far off from the resolved values from way back in Way of the Dragon.
Back