Deep in the heart of the Dragon Mountains, where the wind whispers secrets that no man can know, a single samurai-ko climbed.  Her hands bloody from the crags, and her hair loose about her shoulders, she fought her way up the mountain. I was but a young man then, a stripling among the ise zume guarding the walls. We watched her struggle through the rocky terrain, past brambles and cliff’s edge, to the foot of our ancient home. In those times, no women were allowed within the walls of Togashi castle. No woman had yet taken the vow which bound us to Lord Togashi Sakanoe, our Champion. When the samurai-ko reached the walls of our keep, she stared at the closed and silent gateway. We did not know then what we know now, and by our traditions, we could not open our gates to her. As the day passed, she sat on the ground before the tall parapets, her eyes fixed on the entrance.

For three days and nights she watched us. No food or water was brought to her; no rest did she take.  At last, Tsuneyo, the Master Tattoo Artist, left his meditation and stood upon the height of the walls of Togashi castle, looking down at her. Her beauty touched his heart and I heard him murmur, “Such a glorious creature must not be left to die alone.”

We warned him against his folly, but he would not listen. He went outside the walls to speak to the woman.

She told him she was a Crane, from the far shores of the sea, and that she had seen a vision which led her here. She spoke of a magnificent tattoo, one which enflamed her mind. No man in Rokugan had the skill to create it, and most could not even conceive of its beauty. Despite the simplicity of the design, the flawless pattern was greater than men had skill to create. So she had searched the Empire, and her search had led her to the halls of the tattooed Dragon. The woman spoke to him of her dream, brightly colored and lit as though by a thousand fires. She would rather die here with her vision, she said, than live another day without it. Tsuneyo sat with her for a time, and her dream burned its way into his thoughts. He offered her gruel and water, the fare of the monks within the walls, and went away with her words ringing in his mind.

On the fourth day, Tsuneyo went out to the woman again.  “We cannot help you here,” he said to her. “No woman is allowed within these walls, and our tattoos are only for the ise zume. There are other tattoo artists, other places you can fulfill your vision. Seek them and leave our lands.”

But the woman would not go. “My vision requires the touch of a Master’s hand. None other will suffice. Only you, the Master of your art, can capture my dream. Without perfection, it is better that it was never tried at all. If you will not aid me, then leave me here to die.”
The tattoo artist looked at the woman for a long moment. Her face was strangely pale, her blue-grey eyes shining like a storm on the horizon. The wind blew through her white hair, and her beauty mirrored the darkness within a fire, the shadows of its flames cast upon a cold stone wall. Tsuneyo said, “I have seen your vision through your words. Yet I know – if this tattoo is made, if it is allowed to exist, it must be made through the purity of death. Are you willing to pay the cost?”

The woman was silent, but only for a moment. “Death is a small price for perfection.”

On the fifth day, Tsuneyo brought out his paints and needles and placed them on the bluff beside the woman. I stood on the wall, guarding our monastery, watching as the tattooed artist began his work. The Crane woman removed her daisho, her obi and her kimono, and rested upon the ground at his feet. In the fading sun, her pale back shone like a piece of white marble, and her hair spilled onto the ground.

He sat by her side and gazed down at the curve of her shoulders. For a span of hours he rested there, not touching her, simply remembering the vision. When the sun rested on the lip of the horizon, I saw him lift his needles and brush, and begin.

The pain must have been excruciating. I, who have had my tattoo at Tsuneyo’s hand, I know the torment of bringing forth a part of your own spirit. Each touch of the needle is like a hornet, stinging your soul. But the Crane never moved, never cried out. It was as if something inside her was being freed. As if she knew that to flinch, to move at all, even to breathe, might disrupt the master and destroy all they hoped to achieve. As each star arrived in the heavens, colors began to appear on her pale white skin. The darkness came, but still Tsuneyo worked, only the light of our torches giving him sight. But as I watched, I knew that even without the torches he would still be able to see. The tattoo he was creating had obsessed him. Through the night he labored, and she lay at his feet with the stillness of death. Her delicately arched back was no more than a canvas for their creation. When the dawn came, he set aside his brush and bowl and looked down at her body. All I could see from the walls were the miraculous colors of her skin, rich with vermilion, sapphire, and cinnabar. There was no movement, no sound, and the ise zumi opened the great gates so that I could cross the bluff and go to them.

The woman was dying, her pain too much for anyone to bear. But as I approached, I heard a faint gasp of breath from Togashi Tsuneyo, and he rested his hand upon her back within the tattoo’s dark coils. A trembling moment passed, a shuddering sigh from the samurai-ko, and she began to lift herself from the ground.  Tsuneyo sat back, a soft smile on his lips, and closed his eyes.

As I reached them, the woman draped her rich kimono over her body. I knelt on the cold stone beside Tsuneyo. He smiled, unable to see me through his pain, and he gasped. “She was right…it is…a small price…” Then he was silent, his eyes far away, as if he was looking at the glory of the heavens.

Her voice was as soft and fine as the silk covering her skin. “He knew the price of my vision, and he chose to pay it for me.  He chose death, so that his creation would live.” As she picked up her daisho, I looked up at her perfect face, and I saw her pale beauty. Her deep grey eyes were soft and sad.

“Please,” I said, and my voice was husky with tears. “I….” Words failed me, and there was no way to express the need, the desire, the ache in my heart. She knew what I asked, and she smiled the gentlest smile that has ever touched this earth. Turning, her daisho in her hand, she let her kimono fall to her waist, and the dawning sun crowned her ki-rin in flames. 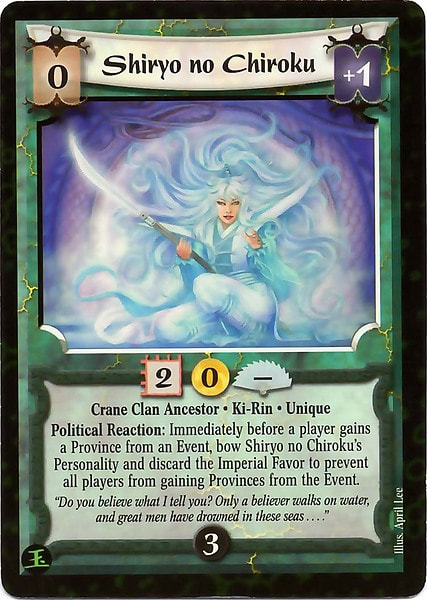